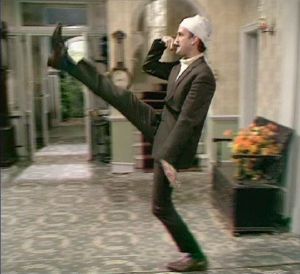 Do you remember that classic episode of Fawlty Towers called “The Germans”?

A group of German guests are arriving at Fawlty Towers. Hotelier extraordinary Basil Fawlty, suffering a concussion from when a stuffed moose-head fell on him (nothing odd about that, of course….) keeps reminding everyone: “don’t mention the war”, lest in so doing the guests from Germany are inadvertently offended.

In the process, he mentions the war endlessly, ultimately driving one of the Germans to tears. The most memorable scene of the episode is when Basil serves his German visitors lunch, and winds up goose-stepping across the lobby of the hotel, imitating Hitler.

I think we have all, at some point, put our proverbial foot in our mouth – those times where we say or do something that no matter how innocent our intentions, comes out in a way that is, well, plain old offensive. In my case it seems that frequent travel, and the need to interact often with different cultures and in unfamiliar languages, exponentially multiplies the opportunities for these “oh, shit” moments.

Until last week, two of these moments stood out as particularly cringe-worthy for me.

The first: about 11 years ago in Venice, Italy, which I was visiting with Linda (my now separated-from wife). As tourists do, we had spent the day wandering around the gorgeous San Marco Square, and along the canals, randomly getting lost in the cobbled side-streets and stopping for coffees and gelato at outdoor cafes. We also splashed out for the obligatory but extremely expensive and clichéd Venice-gondola ride.  Later that same evening, our hotel concierge directed us to a typically cosy seafood restaurant for a typically authentic Venetian fish dinner (comprised largely of frozen seafood products imported from most parts of the known world besides Venice ….).

In fact, the restaurant was so typically cosy and authentic that every other foreign tourist in Venice was there, too. We found ourselves jammed in so tightly that we were literally bumping elbows with a couple from the USA at the next table, who were seated not more than 30 centimetres apart from us.

They heard us talking in our “exotic” accents, and in a very American way (ie: loudly, and with not even the slightest inkling that we may have had no interest in spending our evening talking to them) they made introductions – let’s just call them “Herb” and “Sally” from Long Island. They were recent retirees, kicking off their golden years with a Grand Tour of Europe. I was sitting alongside the silver-haired Sally, and Linda was shoulder to shoulder with the Hawaiian-shirted Herb.

Sally then proceeded to launch into a detailed description of all that she and Herb had been doing in Venice. And when she was done with that, the interrogation of our stay in Venice began: “Oh my God, what are your favourite places in Venice?”; “Oh my God, did you go to the old Ghetto?”; “Oh my God, aren’t the canals just so amazing?”

It was only a matter of time before Sally asked: “Oh my God, did you go on a gondola?”

When we said that we had, the immediate follow-up question was: “So, would you recommend we take a gondola ride?”

To which Linda replied, “I don’t think so, it ‘s very touristy and over-rated, and anyway it is so expensive, it will cost you an arm and a leg”.

Which goes down in history as one of the most unfortunately timed uses of that common English phrase. At the very instant that the words left her mouth, Herb, who as mentioned was sitting alongside Linda and had been largely silent while Sally spoke, and anyway was a bit hidden in the shadows due to the dim lighting, adjusted in his seat and swung around to face us both directly. And in so doing, he revealed to us for the first time that he was an amputee, and was missing his left arm.

This “incident” held undisputed first place as my Best Foot in Mouth Moment until about four years later. At that time, I was living in Melbourne, and I was doing some financial advisory work for a gold mining company that had a large operating underground mine located in the remote desert of Western Australia.

Some colleagues and I were invited to tour the mine, so we flew to Perth (five hours) and then a charter flight took us deep into the Australian outback (another three hours). We arrived at the mining camp, and were ushered into the changing area so that we could get briefed on safety, and then we were kitted out for our trip underground.

We were each issued with a bright orange full-body jumpsuit, steel-toed boots, a hard hat, and a pair of protective eye-glasses. We were also given a utility belt of sorts, onto which were strapped an assortment of goodies that we were told could save our lives in the event of an emergency in the mine (whistle, torch, breathing apparatus, that sort of thing…..).

There we were, a group of city-slickers, nervously preparing to go underground for the first time. Also gearing up in the locker room at the same time was the next shift of real-live mine workers, for them just another working day. They were all big hulking Aussie blokes, with large beer bellies and bulging biceps, tattoos all over their arms and knuckles, and between them they showed off a respectable assortment of shaved heads and rugged facial scars and goatee beards.  These guys were, in Australian slang, “rough as guts” – real men’s men, and not to be fucked with.

So in hindsight, I could probably have chosen a better way to “connect” with the miners besides shouting out as they were changing into their orange jumpsuits and helmets and utility belts: “This is so cool; you look like the Village People”.

Cue the next two hours spent deep underground in the company of the “Village People”, worrying that at any moment I was going to be abandoned in an unused mine-shaft, buried alive, thrown under a rock-hammer, or worse. Oh, shit ….

To recap, my personal best Foot in Mouth Moments: “the gondola ride will cost you an arm and a leg” to an amputee in Venice, and “you look like the Village People” to a group of hard-as-nails mine-workers in the Australian outback.

That was, until last week, when I visited Almaty, Kazakhstan’s largest city. I was there for the next instalment of a tedious and long-running series of commercial negotiations relating to a potential gas project in that country.

At lunchtime on the second day, I found myself sitting in a swish restaurant, flanked on the left by my Kazakh legal adviser and on the right by my Kazakh commercial adviser. Opposite us sat two Government officials and two senior representatives of Kazakhstan’s state-owned gas company.

During the meal the conversation got round to talking about the many wonders of Australia that my Kazakh hosts had seen on television – the beauty of Sydney Harbour, the Great Barrier Reef, the outback. The conversation somehow then moved on to the fact that Australia, for a country with a relatively small population, seems to have produced a disproportionate number of famous people – actors, singers and sportspeople in particular. Names were thrown onto the table like cards at a poker game: Kylie Minogue, Mel Gibson, Harry Kewell, Nicole Kidman, Greg Norman, Hugh Jackman, and so on.

Trying to endear myself to my Kazakh hosts, I chose that moment to lift my foot and jam it firmly into my mouth: “Kazakhstan has also produced famous people, like Borat for example”.

The instant I uttered the words, I realised how insulting my comment was and wished I could retract it, but it was too late. A chilly silence descended over the table for what seemed like an eternity, but was probably only 15 seconds. When conversation resumed, it was clipped and uncomfortable, and it suddenly seemed to me like everyone just wanted to finish up their horsemeat and leave as fast as possible. Not surprisingly, of course – I had just told these hospitable people and potential business partners that the only person I could think of in association with their country was a fictional, Jew-hating, misogynistic sister-fucker.

After lunch I did a little belated homework, and discovered the depth of the offence that Kazakhs take to Borat (d’oh); in particular that Sacha Baron-Cohen’s creation has become one of the dominant representations of Kazakhstan to the world at large. As an example, after Borat hosted the 2005 MTV Europe Music Awards, the Kazakh Foreign Ministry put out a formal statement of objection and even went so far as to run four full-page “pro-Kazakhstan” ads in the New York Times in response.

So my advice to you, if by some quirk of fate you find yourself in Kazakhstan:  don’t mention the Borat. As for me, I won’t be surprised if my Kazakh entry visa is revoked (itself a major bummer – see my previous piece on Uliel’s Law). But at least I have a new Best Foot in Mouth Moment.