You say Oświȩcim, I say Auschwitz 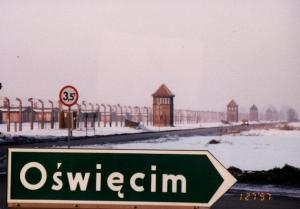 I work for an international oil and gas company. What we do is drill deep holes in the ground, and pump methane gas out from those holes. We put the extracted gas into pipes or trucks or bottles, and sell it. Ultimately, the gas gets burned, in the course of which energy is released, powering your stoves, air-conditioners, factories and cars.

The thing about natural gas that I have never quite understood is why it doesn’t like to be found in places that humans generally like to go to. Sadly, you won’t find natural gas lurking anywhere near New York or London. Natural gas tends to avoid locating itself near beaches, tropical islands, places with nice weather, or places with good shopping.

Instead, natural gas prefers to accumulate in rocks beneath the frigid waters of the North Sea; beneath the ice and snow in Siberia; communing with the flies and the dust in outback Australia. Pick somewhere on a map that is cold, or remote, or miserable. I guarantee that you will find a mother-lode of natural gas in exactly that spot.

My job is to travel to all these wonderful and weird places, and negotiate access to the gas reserves, and then supervise as they are slowly removed from the earth and turned into energy. I have had the pleasure of travelling to the wilds of Sumatra in Indonesia, the back of beyond in Xinjiang Province in the far west of China, and to the grassy steppes of Kazakhstan. I have luxuriated at such notable lodgings as the Hans Rest Stop in Parbatpur, India; at the Best Western in Moranbah, Queensland; at some unnamed roach-motel in Taiyuan, China.

What is even more bizarre is that I quite like doing this. Go figure.

Last year our company bought another company that happened to have a few gas projects and a few guys working in Poland. Poland has enormous latent gas resources, trapped deep underground in beds of shale rock. So vast is the gas potential in Poland that to those in the know, the county is now sometimes referred to as potentially becoming the “Saudi Arabia of Europe”.

Anyway, our new Polish employees had been nagging me for more than a year to visit them, and shortly before Christmas I found myself in London with four days to spare. So I jumped on a Ryanair budget special, and three hours later I found myself in sunny, four degrees Krakow, where our Polish field office is located.

On my second day there, our Country Manager informed me that our newest gas well was to be spudded (that’s oilman-speak for “starting drilling”) just after Christmas, and that preparations for the imminent drilling campaign were well advanced. He said that he had organised a site visit, to allow me to inspect the ongoing work, see the drilling rig as it arrived on site, and meet the crew as they prepared to start operations. I thought this was a great idea – a way to touch and see and get close to the action.

We hopped into a four-wheel drive, and headed out of Krakow. After about 30 minutes we turned off the freeway, and drove down some winding regional roads, passing through a series of hard to pronounce Polish towns and villages. It was bitterly cold and gray, but pretty in a stark kind of way.

And then we drove into a town called Oświȩcim, which looked like every other Polish town we had passed through, with squat gray brick buildings and heavily wrapped people going about their daily business in the last shopping days before Christmas.

Just that two minutes after entering Oświȩcim, we turned left, and suddenly – completely unexpectedly – I found myself not in Oświȩcim any longer, but in Auschwitz, driving past the walls and front gate of the Auschwitz concentration camp. I recognised it instantly – images I had seen a thousand times in books and in films; images that had been burned into my consciousness from a very young age. Not that I could have avoided noticing the throngs of tourists that were milling about at the entrance to what signboards informed me was nowadays known as the “Auschwitz Museum”.

Auschwitz, it turns out, is the German name for the Polish town of Oświȩcim. The site of the most infamous of all Nazi death camps, where an estimated 1.5 million Jews were gassed with Zyklon B and then burned like so many human twigs in giant crematoria. A place where a wrought iron sign with the chilling phrase “Arbeit Macht Frei” – “work makes you free” – still hangs coldly over the entry gates. A place where today 1.3 million tourists per annum pour through, a macabre procession to see first-hand the fading horrors of the Third Reich.

Did I mention Auschwitz is also the place where around 90% of my grandmother’s family most likely met their end, including her infant son after whom I am named?

Perhaps you can understand why I began to feel decidedly uneasy – I was physically short of breath and broke out into a sweat notwithstanding the cold, and I averted my eyes in the hope that we would drive on and get out of there.

No such luck – about two kilometres down the road, with the smokestacks of the crematoria still visible in the distance, we turned into a side-lane, and then into a field, and there we were: at the drill site for the next gas well. With not much enthusiasm at all, I wandered around for 15 minutes, said hi to a few people, looked at some trucks, and then got the fuck out of dodge as fast as I could.

I was struck by the horrific irony of it all: not two kilometres from Auschwitz where countless Jews, including most of my maternal family, were gassed, here I was, second generation Holocaust survivor, inspecting a site for a well that would ultimately provide, of all things, gas to the good citizens of modern-day Oświȩcim. I seriously wanted to be sick.

That night, in an effort to cheer me up and “make amends”, my colleagues took me to what was billed as an authentic Jewish restaurant in the wonderfully restored Jewish Quarter of Krakow. Otherwise known as “the ghetto” where, in the early 1940s, Krakow’s Jews were herded like sheep and forced to live in the most appalling conditions imaginable.

So rather than making me feel any better, the sense of dread and horror I was feeling just got worse. I sat there in the restaurant dutifully eating chopped liver and gefilte fish and cholent, just like my grandmother used to make. Except that thanks to the Nazis, Krakow is essentially Judeinrein these days, and so my grandmother’s food had been prepared for me by a well meaning but very clearly non-Jewish Pole who had obviously figured out that peddling “authentic” Jewfood was good for business.

Sleep didn’t come easily that night. I kept thinking of the gas well located not a stone’s throw away from the gas chambers of Auschwitz. I kept thinking of my work colleagues – lovely, warm and friendly Poles, all born long after World War II, living normal lives with their families, and certainly not responsible for anything that happened at what they know as Oświȩcim, all those years ago. And I kept thinking of their grandparents, who probably were. I kept thinking of the typical Jewish food I had eaten for dinner, in a “Jewish” restaurant in a town where Jews had once represented 25% of the population, but where today there are fewer than 200 Jews left, mostly elderly, and where in ten years, there will probably be none.

Most of all, I kept thinking of my grandmother and her unimaginable suffering during the Holocaust, which somehow had been imprinted on me in my childhood, and which I realised I will carry around inside of me, like a hidden but ever-present scar, for the rest of my life.

Tears welled up from deep inside of me, and I cried myself to sleep.