Pogonophobia and other weird ailments you never knew existed 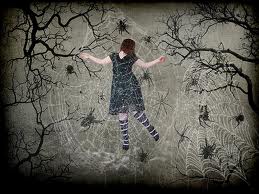 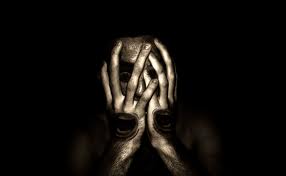 I grabbed the morning papers in London the other day, to read on the train to the airport. Every paper – from the tabloid rags like The Mirror and The Mail, to the more serious papers like The Times, The Guardian and The Independent – were covering as “news” the fact that television presenter Jeremy Paxman had returned to the air after a few weeks of holidays, and was sporting, horror of horrors, a beard.

I am not kidding. The bloke who hosts the evening news shows up with a beard, and the place goes bananas. Social media sites have been swamped with comments from those for and against Paxman’s facial fur. The term “Paxman Beard” has been the most hotly tweeted topic in the U.K. for the past few days, and its merits are being discussed on every news and current event show. In the papers, the phrase “national debate” has even been thrown into the mix, this obviously being a matter of grave importance that requires detailed consideration by the country as a whole.

“Proper” social commentators, not wanting to be left out, have also waded in, with lengthy faux-academic pieces on the history of beards, the social function of beards, and why beards evoke feelings of distrust and suspicion in pop-culture. Clearly, some people have way too much time on their hands. At the other end of the spectrum, the bookmaker Ladbrokes is offering odds, taking bets on whether the beard stays or goes (currently it is 4-5 that the beard lasts a week; 20-1 it gets shaved).

The next day Jeremy Paxman himself chose to enter the fray. He told the frenzied media that he usually grows a beard every year while on holiday, and this year he simply decided to keep it. He also defended his right to a beard (the U.K. doesn’t have a formal constitution, you see, so the right to life, liberty and a beard is in some doubt). And then, in an effort to justify his hirsute choices, Jeremy claimed to have been a victim of pogonophobia.

I looked it up. We all know what a phobia is – the “irrational, persistent fear of certain situations, objects, activities, or persons” – and it turns out that the ancient Greek word for a beard is pogon. So pogonophobia is, quite simply, the irrational fear of beards.

Really – there is an actual word for this? I mean sure, I get that some people are frightened of heights (batophobia) and crowds (enochlophobia) and spiders (arachnophobia). But who could possibly be clinically scared of a beard?

All of which led me to thinking whether there were other equally bizarre phobias that I had never heard of. A quick search of the internet, and I was stunned: there is a treasure trove of the most incredible fears imaginable out there, confirming (in case you are in any doubt) that there are some monumentally weird people in this world.

Here are my favourites:

Barophobia – fear of gravity. I’d imagine that to have this phobia would kind of suck, really. You can chose to stay out of the sun, take steps to avoid insects, and even not grow a beard, but unless you live on the NASA space station, it is kind of hard to avoid gravity.

Sitophobia – fear of eating. This one is obviously right up there with barophobia as being a phobia it must absolutely suck to have. Although at least if you get it, you know you won’t have it for long – either you get cured or about twenty days later it’ll all be over anyway.

Rypophobia – the fear of defecating. Umm, well, yes. What can one say?

Ergasiophobia – the fear of work. Personally, I struggle to accept this as a legit phobia, and regard it as just another case of overly PC new-age nonsense. Either that or I happen know an awfully large number of very ill people. Most of whom, poor souls, are unfortunately also afflicted with phronemophobia as well (the fear of thinking).

Arachibutryophobia – no, this one has nothing to do with spiders. Far more bizarre, this is allegedly the fear of having peanut butter stick to the roof of your mouth. Although there is some debate in the academic literature as to whether this is a real phobia, or one that was invented in the Peanuts cartoon series. There is also aibohphobia – fear of palindromes, most cleverly a palindrome in itself, but also widely reported to be a made-up phobia.

Pentheraphobia – fear of mothers-in-law. Apparently this one of the most common phobias in the western world, and is the only phobia for which there is not just a medical but legal treatment option as well (divorce). Closely related (pardon the pun) is novercaphobia – fear of a stepmother (so now you know for sure that Cinderella was not well in the head), and syngenesophobia – fear of relatives (why limit yourself to just the mother-in-law when you can be afraid of the whole goddamned clan).

Ithyphallophobia – the fear of an erect penis. Apparently this one is so common it has other medical names as well, like medorthophobia and phallophobia, although each is a subtly different variant on the main “I don’t like your member” theme. Which, I’d suggest, is good to know – the next time someone flees in horror at the sight of your upright pecker, you won’t insult them by calling them an ithyphallophobe when in fact it is medorthophobia that ails them. Or indeed, it might be none of these at all, and just a simple case of coitophobia (fear of having sex) or erotophobia (fear of erotic love). And, if this whole subject makes you feel a bit uneasy, then maybe you need to look in the mirror (that is, unless you suffer from catotrophobia, or fear of mirrors) – the issue may lie with you, and your fear of not having or losing an erection (otherwise known as medomalacuphobia).

Helminthophobia – fear of being infested with worms. This is a phobia I put in the same general category as albuminurophobia (fear of kidney disease), syphilophobia (fear of syphilis), and rhabdophobia (fear of being severely punished or beaten by a rod). In other words, entirely rational fear of things you should absolutely be afraid of, and thus not really phobias at all.

Omphalophobia – fear of belly buttons. I have known some people who don’t like having their belly button touched, but that is a far cry from not wanting to have a belly button at all. This phobia is in a group with others like anthrophobia (fear of flowers) and pteronophobia (fear of being tickled by feathers), all being fears of some of the least scary things imaginable.

Luposlipaphobia – the fear of being pursued by timber wolves around a kitchen table while wearing socks on a newly-waxed floor. Nah – just fucking with you mind now. Or more to the point, Gary Larson, author of the Far Side comic strip, is – he invented this fictional phobia, presumably to indicate how ridiculous the whole notion of phobias has now become.

And finally, of course, there would have to be phobophobia, which is the fear of having a phobia.

I any case, given the nature of this blog, I then thought to see whether there are any absurd phobias relating specifically to travel, apart from the very commonly known fear of flying (scientific name is aviophobia, in case you are interested).

Guess what – there are! My favourites (in alphabetic order):

Aeronausiphobia – fear of vomiting from airsickness

Amaxophobia – fear of riding in a car

So there you have them – phobias of all sorts and oddnesses. If the above sample is anything to go by, the conclusion can only be that we live in a world where we are afraid of just about everything – beards to belly buttons to bridges, peanut butter to penises, chopsticks to cars and everything in between.

I guess it says something about the quality of life in a place, when people have the luxury to devote time and effort and column-inches to crap like this. But it does seem a bit out of whack when elsewhere in the same newspapers you read of an economic crisis raging in Europe, and of people being slaughtered on the streets in Egypt. Or when you consider that in other parts of the world a phobia is normally of something genuinely frightful, like dying from malnutrition, or being shot by a 13-year-old toting a semi-automatic weapon.

But for now, here in the happy isles of Great Britain, what matters most is the topic of male facial hair, and some people’s aversion to it. For my part, I will probably not shave tomorrow. 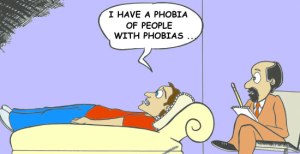