Newark, Delaware – A Tale of the Unexpected A few weeks ago, while in the United States, I visited Newark in Delaware for a couple of days.

Delaware is a small state in the US north-east, wedged in between Pennsylvania, Maryland and New Jersey. It is in fact the second smallest State in the Union, and apart from being a place where many companies are set up for dubious tax reasons, it does not feature on most lists of “essential places to visit”.

Newark is in turn a small town in this small state, and owes much of its existence to being the home of the University of Delaware. It is thus what Americans like to refer to as “a college town”, filled with lots of young people when term is in, and no people at all when term is out.

Newark is also a quintessential American “small town”: rows of neat suburban houses in neat suburban streets, a mall (complete with teenage mall rats and Mall Cops), various “Big Box” retailers on the outskirts of town, and a bunch of cool and funky specialty shops and restaurants strung out along a central main street. Conveniently known as Main Street, God bless ‘em.

It was horribly cold when I visited, and everything was buried under two feet of snow. Which rather than being a romantic white blanket was a lot more like a gray slushy overcoat, making everything seem a bit drab, and dull, and unremarkable.

So in short, apart from the prospect of experiencing a bit of good ’ole Americana, I was not expecting much from Newark. 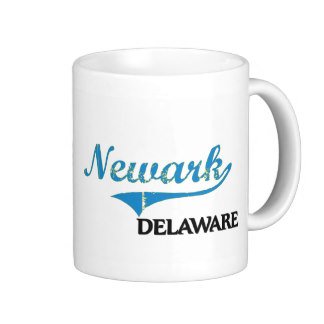 As a child I was a voracious reader. I would indiscriminately read anything I could lay my hands on, from cereal packets to comics to encyclopedias. (Remember those World Book and Britannica sets that used to proudly line your bookshelf in the pre-online era? Well, I once set about the task of reading the entire World Book. I got through to the letter “D” before giving up…).

My high-school English teacher – a wonderful man whose impact on my life was profound and enduring – sought to encourage this early reading addiction. So from a young age, under his tutelage and guidance, I was set to reading an assortment of “classics”, old and new – Dickens, Austen, Twain, Steinbeck, George Orwell, Aldous Huxley etc.

Of all of these, however, my absolute favorite was Edgar Allen Poe.

EAP was an American literary critic and author who lived from 1809 – 1849. A short life, but in which he nonetheless produced a huge volume of work. Most notably his poems and short stories, which were widely read and wildly popular, even in Poe’s own lifetime, both in the US and abroad. He is variously regarded as being the founder of the detective fiction genre, one of America’s greatest ever poets and literary critics, and one of the first people foolish enough to try to make a living solely from writing (not with great success though – as Poe himself once described it: “I have made no money. I am as poor now as ever I was in my life – except in hope, which is by no means bankable”).

Today an assortment of museums, clubs and weird societies exist to study his canon and keep it alive, through research, publications, lectures, and various Poe events.

It was Poe’s collection of short stories – generally known as the “tales of mystery and macabre” – that especially appealed to me as a kid. They were dark and ominous and brooding, filled with intrigue, blood, pseudo-science, horror and death. Just the sort of Gothic shit your average teenager would love, really, and so much more rewarding when delivered on a printed page instead of via video game.

And then there is “The Raven”, a narrative poem that is Poe’s most well-known work and possibly one of the most famous poems of all time. Baudelaire, who translated it into French, described it as “… the poem of the sleeplessness of despair; it lacks nothing: neither the fever of ideas, nor the violence of colors, nor sickly reasoning, nor driveling terror, nor even the bizarre gaiety of suffering which makes it more terrible.”

Big praise for 108 lines that basically tell the story of a fellow down in the dumps for having lost his gal (she died, of course, and although the poem is silent as to how you can assume given the author it was in some horrible and gruesome fashion). One night, while sitting around feeling depressed and morose, he is visited by a mysterious raven, that equally mysteriously is able to speak. But only one word: “nevermore”.

The guy starts asking the raven questions, to which he keeps getting the same one word answer: “nevermore”. Not being the smartest tool in the shed though, our hero persists with the questions, all the while his sanity ebbing away at his inability to make sense of the singular response: “nevermore”. By the end he has pretty much descended into a full-blown madness.

This is, I guess, the whole point of the poem. Not to mention what comes when you spend your evenings chatting to talking birds with limited vocabularies. 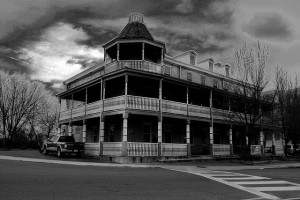 Now what has all this to do with Newark, Delaware, you may well ask?

Well, just at the end of the fabulously named Main Street is a pub known as the Deer Park Tavern. I stopped there for some food in the late afternoon, and also to attend to some emails (In a college town like Newark, even the grimiest of bars has awesome free Wi-Fi).

The Deer Park Tavern isn’t an especially notable building from the outside, although it is handsome, two stories high, enclosed by timber wrap-around balconies, a gabled roof above, and an American flag flying over the whole thing (Americans really, really LOVE their flags). It is also old, dating back nearly three centuries.

Hence the old wood paneling that covered the floor, walls and ceiling. Hence the “help-yourself” popcorn dispenser, alongside the Duck Dynasty video game pushed up against the wall, beneath a flickering neon sign advertising: “All Bombs – $5”.

Hence the bar menu offering (American-sized) “snacks”, like the dozen gargantuan chicken wings in four variants of “Buffalo” flavor that I ordered. Hence the ten or so people sitting around the bar, bantering with the bartender, drinking ales, watching men’s basketball on the big screen and periodically erupting into cheers and hollers.

And hence the large glass cabinet near the front door, showcasing two autographed footballs, a football helmet, and a stuffed hen (the latter apparently being the mascot of Delaware University).

But then, hey, what’s this? Another glass cabinet, this one proudly displaying a raven, stuffed and mounted. Along with a small plaque advising that in this very unassuming and unremarkable bar at the end of Main Street, Nowhere, Delaware, none other than Edgar Allen Poe apparently wrote (at least some of) The Raven.

Actually, yes way. You see, back in a time when men wore wigs, this was the place to stay if you happened to find yourself stuck in Newark for a night. George Washington stayed once, as did Charles Mason and Jeremiah Dixon (the folks who demarcated the Mason-Dixon Line, which went on to become the famous boundary between the free North and the slave-loving South).

The most notable occasional guest though was Poe, who would stop at the Inn to break his frequent journeys between Baltimore and Philadelphia, in both of which cities he lectured and worked. It was at this time that he began to put pen to paper on The Raven.

In a case of life imitating art, a real-life “tale of mystery and macabre” is associated with the Deer Park Tavern and Poe’s patronage of it.

So the story goes Poe spent one particular “midnight dreary” getting thoroughly plastered inside the Inn. He was drowning his sorrows owing to a bad lecture he had just given at the University. He got so drunk that when he went outside and attempted to climb into his carriage, he slipped and fell into the mud, landing flat on his face.

Poe was furious. He stood up and, loudly enough for anyone nearby to hear, cursed the tavern, its occupants, and the whole town of Newark. He was reported to finish by saying: “Whoever comes to Newark and enters this Inn will never be able to leave”.

Now obviously Poe’s talents as a sorcerer did not quite match his talents as a writer, seeing that I myself have been and gone from the Deer Park Tavern with no apparent side effects.

Although here’s the thing – not long after Poe cursed the place, it caught fire in unexplained circumstances, and was completely burned to the ground. The present day pub is not, therefore, the original; it was a rebuild on the site of the original Inn, after the fire, about 200 years ago. 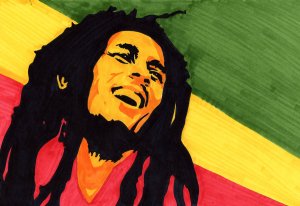 Spooky? Not really, but pretty cool nonetheless and when I learned all this I got pretty excited. I mean here I was, unexpectedly traipsing around on hallowed Poe turf.

So I started asking the harried college student working the bar for further information and trivia. Although he was clearly not amused, and after politely entertaining this bothersome Aussie for a while, tried to fend me off: “Look man, I don’t know much about Edgar Allen Poe or The Raven. But I do know that Bob Marley used to hang out here a long time ago”.

Which, as it turns out, and rather unbelievably so, was also true.

In the early 1960s Bob’s mum remarried, moved from Jamaica to live in the nearby town of Wilmington, Delaware, and sponsored her son, then impoverished and unknown, to come and stay with her. This he did, working shifts in a Chrysler car factory for eight months during 1966, and enjoying the odd tipple (and smoke I suppose) at The Deer Park Tavern.

As soon as he had saved up enough money, the young Marley skedaddled back to Jamaica, and the rest, as they say, is history. Where he went on to become one of the most famous musicians ever. And, although not as widely known, probably the most famous Delawarean ever, too (although Joe Biden, current US Vice-President and a Delawarean, might disagree).

Like I said, it is a rather small State, where not much happens at the best of times.

So there you have it – Newark in Delaware, home to Main Street USA and the Deer Park Tavern. Where Edgar Allen Poe, The Raven, a mysterious curse, and Bob Marley all somehow managed to come together.

Maybe all of which is not that interesting to you, but I confess is bizarrely fascinating to me. At the very least just going to show, yet again, how utterly delicious travel can sometimes be. And where at any given moment the Universe might conspire to dish up a tale of the truly unexpected, when you least expect it.

Ideally with a plate of Pterodactyl-sized Buffalo wings on the side. 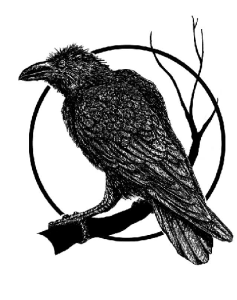