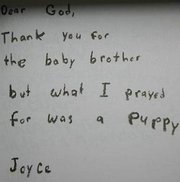 I recently had the joy of spending a few days solo with my three young children. They live in Australia with their mother, who was going to be at a festival over a long weekend holiday. So I flew down to Melbourne from Singapore to spend that time with the little ones, trading in board papers and meetings for a few days of soccer balls and crayons.

On the second afternoon I was there, we visited an old school friend of mine who now lives in Melbourne and has kids roughly the same age as mine. After a late afternoon swim, we were all sitting around the table eating dinner together. The adults present were having the usual “grown-up” discussions:  work, places to eat out, highlights of recent vacations, and the obligatory debate on the rising cost of living, leading at one point to a comment on how expensive it is to get a babysitter in Melbourne these days.

At which juncture, Tali, my eight year old daughter, decided to join the conversation: “When my mom said she would be getting a babysitter, I was scared, because I thought she was going to get someone to sit on us.”

The adults around the table burst into laughter. The kids all thought it was incredibly funny, too. Tali beamed from ear to ear with pride at what was obviously a witty and exceedingly clever thing to say.

I thought about Tali’s comment a lot the next day. With the simplicity and purity that only a child has, she had discarded “adult” wisdom and convention, and instead called it exactly like she saw it. What Tali said was so funny because it was, literally, so right.

Perhaps I am engaging in a touch of over-analysis here. But, having spent eight days on the Hoffman Process earlier this year, a good chunk of which was devoted to the subject of reconnecting to my inner-child, Tali’s remark in complete innocence seemed charged with meaning to me. Either that, or the soccer balls and crayons were addling my brain.

Over the following week, seeking out similar examples of cut-through kiddies’ commentary, I conducted a spontaneous email survey of a few friends with young children. It seemed I was opening a Pandora’s Box, and I received dozens of contributions. A selection of my favourites:

This random sample from friends around the world confirmed for me what I might call the twin principles of Kid-Speak. First, freed of the constraints of the adult intellect, young kids can be amazingly incisive – I think we have all experienced this at one time or another. Second, kids’ understanding of the world around them shouldn’t be underestimated – our kids seem to travel a lot and be exposed to so much from a young age, and they are pretty worldly little beings.

On the last day of my visit with my children, I was packing my bag ahead of the return trip back to Singapore. My six year old daughter, Orli, came into the room. She is still adapting to the new reality that I no longer live in the same house – indeed, that I live thousands of miles away – and don’t get to see her and her siblings every day, like I used to.

“Well, I don’t want to, and I will come back to see you again really soon, but for now I have to go back to Singapore because I have to go to my office tomorrow to do my work”, was my rather lame attempt at an answer.

To which Orli’s reply was: “Can’t you just call them and tell them you don’t want to come back, and you want to stay here with your children?”

With a big lump in my throat, I said: “No sweetheart, I can’t do that, as much as I want to. The people in my office expect me to be there tomorrow, and so I can’t just call and say I won’t be there”.

Orli looked at me with her beautiful big eyes – or more accurately, looked right through and into me – and said: “But why? You’re the boss of you”.

Months of expensive therapy, countless self-help books, various retreats and courses, and in one simple sentence a six year old had cut right through the bullshit and summarised it all with pinpoint accuracy: “you’re the boss of you”.

Like I said, kids can be incisive.  Sometimes, we should stop and listen to them. We might even learn something.

Post-script: I had literally just finished writing this when I received the following email from a friend in Sydney – a belated reply to my survey:

Dropping M (age 8) off at school today we had a rambling conversation about how the world could be improved which included the following:
M: “Appa [Dad, in Korean] is this an electric car?”
Me: “No, it’s just a normal one”.
M: “If I were the boss of the world everyone would drive electric cars”.
Me: “Sounds good. And how would we make the electricity for all the electric cars?”
M: “From orange juice”. [Pause]. “Actually, lime juice”.

In the words of the late, great Whitney Houston, “I believe the children are the future”.