Today is December 31st, the last day of 2014. In the blink of an eye another year has gone by. As has another year of blogging, marking my third full year of writing this blog.

In 2014, more people read this blog than ever before, which is of course extremely gratifying to me. On average, about 4,000 people read each post I wrote, and thanks to the wonder of the internet, these readers are everywhere. So this past year my blog was accessed from 156 different countries in total. For the first time, most readers were from the United States, pushing Australia and the UK into 2nd and 3rd spots, respectively. Although far more intriguing I think are the lone readers I seem to have picked up in each of Cuba, Malawi, the Syrian Arab Republic, and the Faroe Islands. All I can say is that if you folks are reading this, thank you very much for your interest, and next year, bring a friend!

The blog post that got the most attention in 2014 was the one I wrote mid-year about the then ongoing war in Gaza (see Notes on Gaza from Venice). I got more hits and comments than anything else I have ever written, by a factor of three, so obviously this tapped into something that meant a lot to a lot of people.

More surprisingly though, the second most popular post of 2014 was the piece I wrote about the rampant use of a social media “hook-up” app at the Winter Olympics, which was apparently facilitating a lot of international goodwill generation between the athletes (see The Tinder Games). All of which proves, yet again, what we all already knew: sex sells.

This does not mean it has been an uneventful year for me outside of the blogosphere.

As in past years, I got about a fair deal in 2014. But to fewer places and also mainly to those places I have visited before. My destination list (working counter-clockwise around the globe) was Australia, Singapore, Hong Kong, Israel, Germany, France, Spain, Portugal, England, Scotland, Morocco, South Africa, the United States and the Bahamas.

Amongst the most memorable journeys of 2014 was my visit to South Africa, where I retraced my childhood and got to experience a safari for the first time. The most “exotic” was probably my inaugural trip to the “deep south” of the USA. There, venturing away from New York and LA and Miami, I finally got to eat grits at a roadside diner in Georgia, fulfilling an obscure lifelong fantasy of mine (in and of itself a subject for a blog I guess, but we will leave that for another time…..).

My job in the UK came to an end in August, and once again I found myself packing up my belongings and taking up residence in a suitcase, pending my next work assignment. Which, on the bright side, looks like it will be in the Bahamas: I guess there are worse things to look forward to in 2015 than an endless summer.

Against this backdrop my personal life this past year has been a bit of a mess, and I have not always conducted myself in the best way, and I have hurt some people who deserved a lot better. You know who you are, and to you I say publicly that I am sorry, and I ask your forgiveness.

But even in the worst of thunderstorms there are always those rays of sunshine which show up when you need it the most, to light the way forward. I have been blessed with several sunbeams in 2014 as well. Again, you know who y’all are, and to you I say thank you for your support, and for which I am grateful.

In the coming year I intend to get back into more regular blog-writing, and I intend to make some progress on my long-held desire to write a book. I also intend to lose some weight and reshape my eating habits – especially since I promised my eleven year old daughter there would be no more weird food after she saw a show on TV about how Ebola was probably spread by people eating bats. So this might crimp my blogging subject matter a touch. On the other hand, I hope to be able to use the Bahamas as a springboard to explore some of the Caribbean and maybe South America, both places I have never been that are high on my bucket-list. Hopefully, I will find things there to write about in place of puffin burgers and roast silkworms.

I ended 2013 on a beach in Hawaii (see Happy New Year from Hawaii). This year ends in a similar way – on a beach, this time in Sydney, Australia. And not just any old beach though, but Bondi Beach, possibly the most famous beach in Australia, and also the beach I grew up on. Standing on the terrace of the Bondi Icebergs, I look out over an arc of golden sand and watch the green-blue water turn into waves and crash onto the shore. There are thousands of people from all over the world out and about, sunning themselves, swimming in the water, or walking along the scenic clifftop path that links Bondi to nearby Bronte Beach. Everyone seems to be happy and laughing as they watch the sun set on 2014, and the sun rise on 2015. There is something in this whole scene that I find is quite calming and reassuring.

So despite a fair few major fuck-ups along the way, it seems that I am ending 2014 with a hint of optimism. Like I have moved forward in my life journey, even if I don’t really know yet what the final destination is. Which I guess can only be considered a good thing.

I wish you all, whichever city, beach, mountain or farm you may be reading this in, a very Happy New Year, and all the very best for 2015. 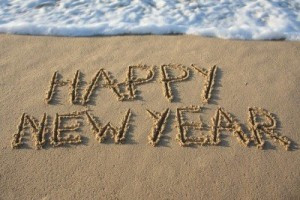