A few months ago I visited Morocco. I had two weeks to fill in between finishing one job in London and starting another job in the Bahamas.

It was my third trip to Morocco, which as countries go is of extra-special significance to me. This is where my father was born, and where his family had lived for centuries before relocating to Israel in the 1950s (see my previous post A Moroccan Journey).

On my prior visits I had toured the medinas (old towns) in places with exotic-sounding names like Taroudant and Tafraoute. I had wandered the mellahs (ancient Jewish quarters) of cities like Rabat and Sefrou, and especially Fes, my ancestral stomping grounds of sorts. I had shopped endlessly in the Marrakesh souk at day, and at night had joined the throngs in the  D’jma el Fna, Marrakech’s main square, to hear old men tell stories, watch street acrobats perform, and generally revel in the smoky atmosphere of the Bedouin carnival that happens there each night.

I had braved fierce winds to walk the ramparts of the massive sea walls surrounding the magically beautiful town of Essaouiria, and I had braved scorching sun to wander through palm oases and abandoned kasbahs on the fringes of the Sahara desert. In the course of which I had perched on the back of a lurching camel for so long that I lost all feeling in my nether regions (which lack of sensation lasted for two weeks after, although perhaps, as my kids like to say, that’s too much information ….)

I’d eaten tagine of every imaginable variety (Morocco’s national dish, a stew of chicken, lamb, beef, fish or vegetables, cooked in a spouted clay-pot and spiked with whatever is handy, like preserved lemons, olives and aromatic spices). I had also eaten cous cous prepared fifty different ways; I’d feasted on real pastilla (a cinnamon and sugar infused filo pie layered with shredded pigeon, the signature dish of Fes and something that I am told my grandmother used to prepare especially well); I had drunk so much sweetened mint tea (“Moroccan Whiskey”, as they like to call it, offered without limit in almost any social setting in Morocco) that my pee turned green.

And so on and so on, but you get the picture: on prior visits I had ticked off pretty much everything on the “list of things a tourist should do in Morocco”.

This time round, therefore, I had actually hoped to do as little as possible. Sure, the itinerary included spending a few days in Marrakesh (the obligatory tourist stuff) and a quick side-trip to the desert (sand dunes et al, and yep, riding a camel again). But for me the main attraction of this particular trip was the prospect of spending six days on a Moroccan beach doing absolutely nothing besides sun-baking and swimming in the ocean. An especially appealing plan given that London, a mere three-hour plane ride away, was already a frozen mess owing to winter having arrived early, and hard.

And for whatever else I may have had in mind for this trip to Morocco, adrenaline was most certainly not on the agenda. I spent my teenage and university years in Sydney, Australia. For all of that time I lived within a stone’s throw of Bondi Beach, not to mention half a dozen other world-famous ocean beaches. My formative years were thus spent surrounded by surfers and surf-culture.

Yet I cannot surf. I have never even tried. My kids can surf, my younger brother and many of my friends surf, and even though just about everybody I know has at some point or another caught a wave, I have never come close. Not once. This makes me something of an anomaly in Australia, if not a downright national disgrace.

And whilst I have lived with this shame for all of my life, I thought that by age 42 I was past it. One of those bucket list things that I just assumed if I hadn’t got round to doing by now I never would, and anyway the world is probably that much safer for it.

Alarm bells started ringing when I realised that I was travelling with someone who is quite an avid surfer. Especially when she informed me that Morocco has a lot of great surfing spots and oh, by the way, wouldn’t it be totally awesome if I got a chance to try it sometime? Plus Oualidia (pronounced wa-li-dee-ah, the tiny beach town we’d be staying at) is apparently a near perfect place to learn to surf, on account of its protected lagoon which produces incredibly long, gentle waves that any idiot can stand up on. Supposedly it is such a good learn-to-surf location that children of the Moroccan royal family spend their summers at Surf Camp there; even a 70-year-old had successfully learned to surf there, just a few weeks before, so I had no excuse.

Which, to cut a long story short, explains how I found myself in a tight-fitting wet-suit, flailing about waist-deep in the Oualidia lagoon, sputtering and choking on mouthfuls of salty sea water like a drowning mouse.

Welcome to my less-than-stunning debut as a surfer-dude.

You see, I had agreed, somewhat reluctantly and after much cajoling, to give it a go. To minimize embarrassment (and the risk of serious bodily harm) I had only agreed on the basis that I be accompanied by a private instructor at all times. I had also waited for a day that was sunny and especially warm, with calm waters and blue skies. And I had chosen a huge surfboard, coated in super-buoyant foam rubber, so that it was more like a floating raft than anything else.

For his part, my instructor was totally confident of success. He said that in the calm of Oulidia’s lagoon anyone – stress: absolutely anyone – could easily stand up on a surfboard.

Although anyone, it seems, did not include me. Because surfing, as I quickly learned, requires two basic things to make it happen: co-ordination, and balance. Both of which are not exactly my strong suits. 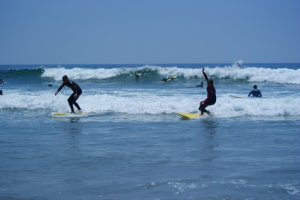 Let’s just say that I struggled. I would paddle out into the middle of the lagoon, where the instructor was waiting for me. He would give me a few tips, rev me up with words of encouragement, like “you’re going to do it this time, man!” or “you got this dude, just relax and enjoy the wave!”, before pointing the nose of my board towards the beach. Then he would wait for a wave, give me a shove as it was approaching, and start shouting: “Paddle, paddle, paddle!” To be followed by: “Now stand up. Stand up. Stand Up!!! STAND U…..” Until the inevitable wipe-out that followed like clockwork a few seconds after that. Followed by: “Nice try, you almost had it; you’ll get it next time!”

And so it continued for about an hour, like a strange form of medieval water torture. Me paddling, instructor shouting, me attempting to stand up, me falling off the board (which, despite its size, felt like I was trying to mount a moving bar of soap), me fishing myself out of the water, and then away we’d go again. My arms ached, my lungs were filled with water, and after a while I got the distinct impression that even the instructor’s over-the-top enthusiasm was beginning to falter.

And then, a bona-fide Moroccan miracle happened. On what I had sworn to myself was going to be my last attempt of the day all the elements came together in one freakishly perfect combination, and almost despite myself hey presto – I was standing up on a surfboard! I distinctly recall looking around, thinking to myself: “holy fuck – am I actually surfing?”, and almost falling off the board in shock.

But I hung in there, and the reward for my efforts was to get swept along on the crest of a wave for about ten seconds, although it felt like a lot longer. When I finally toppled over into the water the whole place seemed to erupt into whoops of delight. From me, from the instructor, from every other surfer in the lagoon that day, and even from a few complete strangers on the beach who for the past hour had been watching my surfing attempts like they were at an open-air comedy show.

World champion surfer Kelly Slater once said of surfing: “It’s like the mafia. Once you’re in – you’re in. There’s no getting out”.

Well it wasn’t quite like that for me, and I am pretty certain I am not going to be joining the international surf-tour anytime soon. But having got the hang of it (sort of) I stayed in the water for another 45 minutes that day, and I did manage to catch a few more waves.

Before I knew it, I was smiling and laughing, the pain in my arms had been forgotten, and dare I say it, I was actually enjoying myself. Who knew? Plus I had earned the right to tick “surfing” off of my personal bucket list. In Morocco, of all places.

All of which just goes to prove, yet again, that no matter how hard you may try to find them the best travel experiences are very often those that find you. When you least expect them, and in the places you least expect.

“The best surfer out there is the one having the most fun”.
Phil Edwards – surfing pioneer 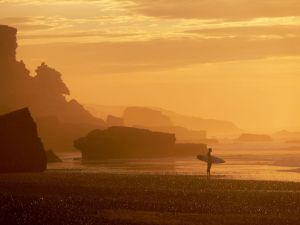