I was just in Sydney for ten days, where I enjoyed the final throws of the Australian summer with my kids. It was warm, the sky was blue, and Sydney was at its fabulous best.

Question: So what do you do to keep three tweens occupied on a bright sunny day in Sydney?

Answer: You go for a walk.

Sydney is a town defined by its magnificent natural harbour, where you will find most of the city’s iconic sights, like the Harbour Bridge, the Opera House, Taronga Zoo, and so on.

But for locals, the beaches of Sydney are probably just as defining, if not more so. Stretching from Cronulla Beach in the south to Palm Beach in the north, the city’s oceanfront is fifty kilometers of sandstone cliffs, coves and bays, dotted with over forty white-sand beaches.

Much of this coastal strip has been organized and tamed into walkable trails. These stretch for miles, and largely link up so that it is almost possible to walk the entire north-south length of Sydney (apart from the ferry ride needed to cross the harbour). And on any given day you’ll find Sydney-siders out in force, up and down these seaside walkways. If the city’s coastline was viewed from the air, the human traffic would look a bit like a column of ants, scurrying to and fro, from beach to beach.

Possibly the most well-known of these walking paths is the one that runs from Bronte Beach to Bondi Beach, in Sydney’s eastern suburbs. It is roughly three and a half kilometres long, linking together three wonderful beaches – Bondi, Tamarama, and Bronte. It offers the prospect of a solid 45 minute work-out, accompanied by some truly stunning views along the way. I have walked, jogged and run along this path literally hundreds of times over the years. Bondi was, after all, my “hood” when I was growing up.

But the Bondi-to-Bronte walk is not something I have ever done with my kids. So it seemed like this trip would be a good time to start. 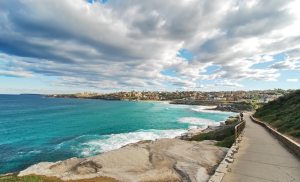 For those readers who have never been, let me briefly describe the main highlights.

You start at Bronte Park, a lovely green space first laid out in 1887. The park rolls down a gentle hill to meet a wide crescent of white sand that faces directly west, across the vast blue of the Pacific Ocean. At the south end of Bronte there is the outdoor ocean-fed swimming pool of the Bronte Baths. A strip of outdoor cafes, with cute names like “The Bogey Hole”, line the street at the southern flank of the beach.

In the park there is an old-fashioned toy-train that children can ride on; at the northern end of the beach is the Bronte Surf Life Saving Club, with its racks of surfboards and life-saving gear displayed out front. All in all there is something quite quaint and lovely about Bronte Beach, and it has always been a favorite local haunt.

Round the headland, take in the views, and then the path will double back to begin a gentle descent towards Tamarama Beach. Long ago this was the site of Sydney’s favorite fun fair, the Royal Aquarium and Pleasure Grounds (later renamed Wonderland City). This is where folks came to enjoy a day out, thanks to assorted carnival delights like a shark and penguin exhibit, a roller coaster, a suspended airship, and a skating rink “illuminated by electric light”. But the fairgrounds were shuttered in 1920, and since then Tamarama has been nothing but a beach: small and tucked away, a “best-kept secret”, and very popular with the beautiful people of Sydney (hence its local nick-name, “Glamarama”). 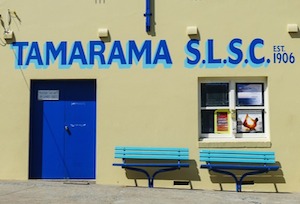 After Tamarama the path again begins to climb steeply. You pass the Tamarama Surf Life Saving Club, perched high on a bluff looking down over the beach, and thus undoubtedly one of Australia’s most scenically located surf clubs. Continuing around the headland you’ll ascend even higher, to MacKenzie’s Point, where the wind picks up, the camera-toting tourist hordes swell, and the reward is sublime views of the Sydney coastline –from Bondi to Bronte and beyond.

From there the walk drops down some steep stairs to wind right along the seafront. On one side of you there will be wave crashing onto massive boulders; on the other a backdrop of towering 200 million year old sandstone cliffs. These are smooth and white, hollowed out from thousands of years of erosion, apart from where the occasional bright band of color indicates minerals having leached into the rock. If you know where to look, you might also spot some ancient Aboriginal rock carvings, a gift to the present day from Australia’s first residents.

And then finally the path will bring you to Bondi Beach, without question the most famous beach in Oz and a magnet for sun-seekers from around the world.

At the southern end of the beach the trail crosses in front of the Bondi Baths, home of the Bondi Icebergs Club. To become a Bondi Iceberg you need to swim three Sundays out of four in the club’s magnificent ocean-fed lap pool. But you need to do this without a wet-suit during the months of May to September. That is, during the Australian winter, when the water is horribly cold. And you have to do this for five consecutive years. Plus from time to time during the winter a truckload of ice is dumped into the pool, just to ensure it is suitably cold enough. Little wonder that most qualified Icebergs are old men with deeply tanned wrinkly skin, that looks like they are wearing a suit made of old leather about to fall off from their body.

This is where the walk ends, and from the deck out front of the Icebergs the view is as good as it gets: north across Bondi Beach, offering an entire panorama of the beach, with its long wide curve of pale golden sand, craggy rock formations at either end, deep blue sea, and foamy white waves rolling into the shore. It is a truly gorgeous sight that takes my breath away every time I see it. All the more so when I remember that this is smack bang in the middle of a bustling urban metropolis. 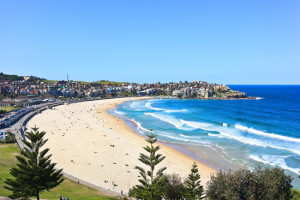 So that’s the basics of the Bondi-to-Bronte walk, but as descriptions go is equivalent to me saying “a truffle is a fungus that grows under a tree” – accurate, sure, but not really conveying the truly amazing flavor and texture of it all, and what makes it unique and special. So let me try.

The first thing to be said about the Bondi-to-Bronte walk is how totally enmeshed in the ocean you feel, and not just from the stunning views. For me, what is even more impressive is how at various points along the walk, when the trail drops to sea level, you are wedged in tight between cliffs and sea. You can smell the salt-air and feel the spray of the waves, and you get so close you can literally lean over and touch the water. If you are there on a good day, you might even spot dolphins or whales. Not something you often get to do, especially in the heart of a major international city.

The second thing that always strikes me about this walk, no matter how many times I do it, is how it provides a window into the essence of beach culture, Aussie-style. When the weather is warm, every beach you pass along the walk will be blanketed with beachgoers. From the high vantage points looking down you will see surfers bobbing in the waves at every beach, like a strange clan of rubber clad soldiers. You will see Aussie-style “baths”, mainly swimming pools constructed on the rocks at the edge of a beach and fed with sea-water. These are some of the most scenic pools you will ever find, anywhere in the world.  And you will pass Surf Life Saving Clubs, Aussie institutions where the whole business of surf life-saving was invented over a hundred years ago. Just about every serious beach in Australia will have one; Bondi and Bronte’s are two of the oldest and most venerable. 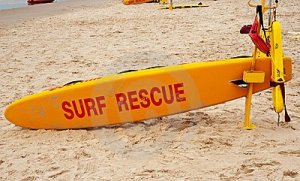 But more than anything, for me the absolute best thing about the Bondi-to-Bronte walk is the people you will encounter along the way. You’ll see packs of kids and students, groups of friends, families, aged couples, young and beautiful people festooned in tattoos. There are backpackers and tourists; buff life-savers; power-walking mummies clad head-to-toe in Lulu-Lemon sportswear; surfer-dudes in board-shorts. Joggers and walkers and dawdlers – they will all be there.

You might pass men (usually older) who obviously never got the memo that strutting your stuff in tight speedo “budgie-smugglers” isn’t cool anymore, and you might pass women wearing some of the skimpiest bikinis you will see this side of Rio. Although it wasn’t always this way – until 1902 swimming in the sea at Bondi was illegal, and until 1960 “modesty officers” would patrol with tape measure to check women’s bikinis – anything under 4 inches was prohibited.

On the walk you will hear languages and accents from every corner of the earth. You will see people sunning themselves on the sand and frolicking in the waves; you will see folks enjoying picnics in parks, sipping cappuccinos in packed-open-air cafes, or just sitting on a beach towel sucking on a frozen fruit ice. There might come across games of soccer or beach tennis or Frisbee toss; there will certainly be surfers in the water and impromptu games of beach-volleyball underway on every strip of sand.

Most of all, you will share the experience – of sun and sand and outdoor life – with hundreds of other people. Every one of whom will be enjoying it just as much as you are. Little wonder that so many visitors to Sydney, after seeing all this, come to think of Australia as some kind of modern-day Promised Land.

I guess the proof is in the pudding – my kids loved the walk. They thought it was fantastic. They took it all in, snapped photos, asked hundreds of questions, and the walk from Bronte-to-Bondi and back – two hours and about seven kilometres – passed without effort or the slightest hint of complaint or boredom. With kids these days, that is normally something which only happens when an iPad is involved.

Standing at the Bondi Icebergs Club staring across the beach, while three enraptured kids watch surfers compete to catch the next breaking waves, I thought how truly amazing this all was. A world-class walking trail right in the heart of Sydney, and which Sydney-siders for the most part take for granted.

And it occurred to me that a travel Bucket List doesn’t only have to consist of one-off experiences in exotic faraway destinations. Sometimes, the best Bucket List experiences are those you will find right under your nose. Experiences you can re-live again and again and never tire of.

We should all be so lucky. 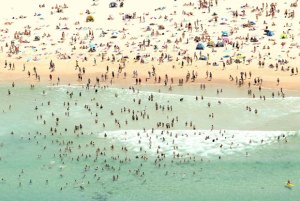