One of the most popular blog posts I’ve written so far was a very early piece about the quirks of life as a foreigner in Singapore (at that stage I was still living there). In it I described, among other things, the story of how I was required by the Singaporean Ministry of Manpower to deport my “harem” of Filipino domestic maids.

An incident I never wrote about in that blog post, however, was the day that Annie arrived to live with us in Singapore, from the Philippines. At the time she was only 19 year’s old, just out of high-school, and keen to join the well-worn path for so many Filipino women of finding work as domestic helpers outside of their country. The tally of kids in my household had recently increased to four, meaning that under Singaporean law I was eligible to hire a second full-time FDW (“foreign domestic workers”, as Singapore’s army of imported lowly-paid maids are euphemistically referred to). Annie’s older sister already worked for us, and suggested that as her younger sister was looking for a job, maybe we might hire her too. So we contacted a recruitment agency, filled in a bunch of forms, paid a bunch of fees, and three weeks later, Annie landed on our doorstep.

She had, until then, never traveled outside of the Philippines. She had never flown in an airplane. She had thus far lived her entire life in a thatched hut, in a small country village, on one of the Philippines’ more remote islands. Her basic diet, to that point in time, consisted of a bowl of rice three times a day, eggs and home-grown vegetables, and on really special occasions, a bit of chicken or fish. She had studied English at school, and arrived at our home with nothing but a nervous smile and a small suitcase of personal belongings. Quite literally the only clothes she had with her were the t-shirt and jeans she was wearing.

So on Annie’s first afternoon in Singapore we took her on an excursion to the nearest mall, to stock up on some basic necessities for her, and to buy her some clothing. She seemed completely stunned by what she was seeing – in shock almost – although who could blame her? The traffic, the lights, the crowds and noises, the tall buildings: these were all completely new and foreign things to her, and must have been totally overwhelming.

There is one moment in particular from that day I will never forget, which was when we had to go from the ground floor of the mall to the first. I was looking down at my mobile phone as I walked, and without even thinking charged ahead and stepped onto the escalator that linked the two floors. About halfway up I turned to ask Annie a question, but she was not there. Rather, she was standing at the base of the escalator, looking up at me, scared and completely confused. In 19 years of life Annie had never before been on an escalator, and quite simply did not know what it was, or how to use it.

I felt like an insensitive heel, and immediately rushed back down to help her, and of course within seconds she was fine. But it was one of those “aha” moments for me, where I really got to see how extraordinarily privileged our modern-life can be, and how easy it is to take so many of the little things for granted. An escalator, if you’d never encountered one before, would probably be a petty bewildering, scary thing, don’t you think?

(A similar experience happened two years later, by which time Annie was already an escalator pro, and a much beloved member of our family. We made a trip to Australia in the wintertime, and Annie came along with us. When we landed in cold and rainy Melbourne, she was so excited. Not to be in Australia, mind you, but to experience a temperature below 24 degrees centigrade for the first time. She told me that having lived her whole life in the Asian tropics, a cold day was until then something she’d only ever seen on TV. It took a while to get my head around the idea that even the simple transitioning of seasons, from hot to cold, is a thing the majority of folks on this planet don’t take for granted).

So why am I mentioning all this now?

Well, this morning I flew from L.A. to Houston, where I have some business meetings later in the week. At the Los Angeles Airport I went through the usual rigmarole that accompanies the act of flying anywhere these days: fighting my way through a crowd, navigating a faceless check-in machine, collecting a boarding pass, and making my way to the security screening checkpoint, which as usual required waiting in an annoyingly long queue.

After a couple of minutes of shuffling forward I felt a tap on my shoulder. It was the young man standing directly behind me in line – clean-cut and tall, in cargo shorts and a plain blue t-shirt. “Excuse me Sir,” he said, “I haven’t flown in 12 years, so I am not sure what I need to do. Can you help me?” It seemed like a really strange question, and I must have looked a little confused. But still, I explained to the young man that he would shortly have to remove his shoes and belt and jacket, empty his pockets of his wallet and mobile phone, take any laptop or other electronic equipment out of his bag and place it in a separate tray for inspection, dispose of any liquids over 100 ml, and so on. You all know the drill. We got chatting. The young man told me that the last flight he had been on – and the only flight he had taken in his life thus far – was a short thirty-minute flight, at age 11. He was an L.A. native, now enlisted in the Marines, stationed at Camp Bakersfield in central California, and on his way to a training camp in Florida. He heard my accent and asked where I was from. When I told him Australia, he smiled: “I met a few people from Australia, some of your Marines who came here to train with us. Really great guys, Australia must be an awesome place,” he said.

I asked him, somewhat incredulously: “How have you managed to get about for 12 years without flying?” He replied: “I guess I’ve just driven to the places I need to be – L.A, San Diego, Vegas, Bakersfield, once also to San Francisco.” He said this so matter-of-fact, as if driving everywhere was entirely normal, and flying was the strange and incredulous activity to be noted.

He then told me that in three months he would be taking his third flight ever, this one to an overseas deployment in the Philippines. I laughed, “That is a seriously long haul for a new flyer.” The young man nodded and said, “I know; I am kind of scared about that.” I couldn’t help but think how seriously odd that sounded: a Marine, adept at handling weapons and charged with the very daunting responsibility of protecting us, was nervous at the prospect of taking a long flight.

But just like with Annie and the escalator in a Singaporean mall, the disjointedness of it all really hit me when our turn came to walk through the full body scanner at the security checkpoint. I traipsed through the machine without even giving it a second thought, and once on the other side looked back to where the young Marine was waiting, next in line.

He was standing still, not totally sure what to do. A member of the security staff was barking instructions at him, and he hesitatingly stepped forward into the scanner. He looked at me, and in that instant he seemed to no longer be a soldier, but a small helpless child, bewildered and lost.

And who could possibly blame him? It occurred to me that having to strip down to a single layer of clothing before stepping into a glass cylinder, then raising your hands above your head while invisible “millimeter wave technology” scans your body for weapons and explosives, is anything but normal.

Once done with security, I set about the task of re-dressing and repacking my bag. The young Marine was doing likewise. When we were both ready to leave he held out his hand. “I’m Augustus, nice to meet you,” he said. “And thank you very much for your help Sir. I appreciate it.”

Then we parted ways, Augustus to find the departure gate from where he would catch his first flight in over a decade. And me to make my way to mine, where the flight to Houston – my thirty-first individual flight segment for this year alone – was already boarding.

Sometimes, my sense of wonder with the world we inhabit starts to fade. I forget how extraordinary it is that I can make instant video-calls to friends and family all around the globe; or how incredible it is to have access to an unfathomable amount of information from the comfort of my phone; or even just how amazing it is that there is a moving walkway waiting to carry me from one floor of the mall to the next.

And sometimes, I completely take for granted my ability to fly; to be able to wing my way from one far-flung corner of the planet to another, at the drop of a hat. As recently as in my grandfather’s lifetime doing this was beyond the realm of human imagining, and yet today air travel has become so ho-hum that it is the person who has never flown who stands out like a sore thumb, and not me.

So thank you Augustus, for reminding me of what a mad, crazy, privileged life of adventure I have been blessed with. It was great meeting you too, and I hope you enjoyed your flight. 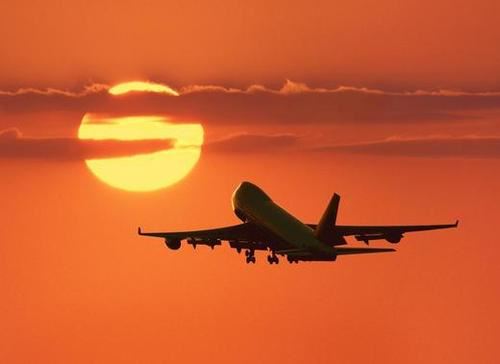