A Little Bit of Everywhere in LA I am spending more and more time in Los Angeles lately. It is halfway between Australia (where my kids live) and New York, London and The Bahamas (where I do most of my work). My brother and his family live virtually in the shadow of the famous Hollywood sign. And the weather is totally agreeable, all of the time. It might be the middle of L.A.’s winter, yet even as I type this I am sitting outside in the sunshine, in a t-shirt.

There is also something about the energy of Los Angeles that I really like. It is a buzzing, happening, inclusive kind of place. For those who have lived here for a while it might be just any old town, but to newcomers it is something much larger than that: a synonym for fun and entertainment; an immediately recognisable place that has served as backdrop to countless films and television series; and a beacon of hope and light, drawing in fame and fortune seekers from across the United States, and the world beyond.

This all makes Los Angeles a place where anyone and everyone is invited to join the party. And where over the past century, a lot of people have. Thanks largely to the movie business (and also the city’s often overlooked oil, automobile and aeronautical industries) L.A. has grown from a population of around 100,000 hardy pioneering souls in 1900, to about 18 million today (give or take the few million undocumented locals who Señor Trump would like to evict).

Los Angeles is now the second largest urban population centre in the United States. Its global “pull” is such that more than half its residents were not born in the city, and about 30% come from outside of the United States altogether. People from over 140 countries speaking 220 languages nowadays call Los Angeles home, and it has the largest communities of Mexicans, Iranians, Vietnamese, Filipinos or Koreans anywhere outside of their home countries.

In short, L.A. is one of the greatest multicultural melting pots the world has ever seen. And it means that every minority community worth its salt has felt the need to carve out a small piece of territory in this megalopolis, and to brand it as their own “Little Somewhere”.

Here are my favourites. (So far, that is. There are limits, even to my own well-practiced eating capabilities). 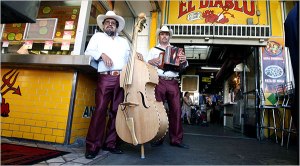 Given that Los Angeles is, in many respects, practically an outer suburb of Mexico City, you’d expect a Mexican vibe everywhere in this town. And indeed, that is true. For example, I recently dined at Gracias Madre, the ultra-hippest most über-chic restaurant in town, and where the Mexican food (dished up to the coolest, most gorgeous crowd of Hollywood hipsters imaginable) was 100% vegan. I know, I know, it shouldn’t be allowed.

And although there is no official “Little Mexico” in Los Angeles, to those in the know the Mexican heartland of the city is in East L.A. The neighborhoods of Boyle Heights, El Sereno and Lincoln Heights might be a touch seedy, but if you are in the market for street tacos, handmade tortillas, bacon wrapped hot dogs, elote (corn on the cob with mayo, cheese and chili powder – don’t knock it until you try it) or seriously potent margaritas, this is where you have to come. It is well worth the effort, and the only real danger is the prospect of being attacked by a roving mariachi band at any given moment. 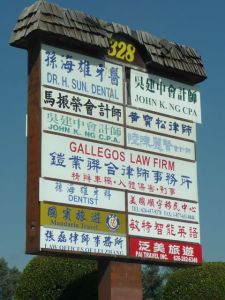 Like most downtown areas around the world, Los Angeles’ boasts a Chinatown. Frankly it is a pretty lame and touristy place, and quite a sad second-cousin to the much better Chinatowns of London, San Francisco and Sydney.

But hit the freeway and head east into Monterey Park and it is a whole different story. This is where L.A.’s massive ethnic Chinese population congregates in numbers (about 50% of the locals are Chinese; 75% of Asian origin). Here, giant 1,000 seat restaurants churn out delicious dim sums and crispy roast duck, day and night. Plus after a gluttonous eating fest you can help it go down with a soothing foot massage, to be had at any one of the countless local massage joints. You may just as well be in Hong Kong or Beijing. The largest Korean population in the USA lives in L.A., and Koreatown (mainly between Western and Vermont Avenues just west of downtown) is where you go to find all things Korean. Like Korean barbecue, dumplings, fried street foods, and weird doughy noodles in florescent red chili sauce. Or like the spectacularly good spiced tofu soup I had last week, at midnight – L.A.’s Koreatown is most decidedly a 24 hour kind of place. And of course for the truly reckless there are Korean karaoke nightclubs, where hard core aficionados (ahem) can go to get their fill of the latest K-pop tunes.

Koreatown is also where you will find some of the finest examples of that most quintessential of L.A. foodie things: the food truck. For some unexplained reason, the city’s Korean community has taken to the food truck concept with a vengeance, and many of L.A.’s most renowned food trucks offer Korean-inspired fusion cuisine. These can often be found parked in and around Koreatown. Like Kogi, a food truck that pioneered the odd concept of Korean-Mexican crossover food. I mean, you’d think that Tofu Tacos or Kimchi Quesadillas would never work. But trust me (and the long queues lined up day and night to get them): they do. 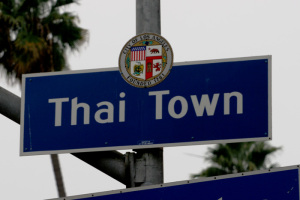 Lest they be forgotten in the crush, the rest of Asia has laid claim to parts of L.A., too. Thus in super-trendy Echo Park and Silver Lake you will find Filipinotown, where home-style restaurants sell slow-cooked pork knuckles, just like in Manila, albeit incongruously nestled up alongside hipster coffee emporiums. In Long Beach there is Cambodia Town (also known as Little Phnom Penh) and further south, in Westminster, is Little Saigon. And in East Hollywood, around the corner from where my brother lives, is Thai Town. Apparently this is the only officially designated Thai neighborhood in the USA: come here for Thai restaurants, Thai groceries, and Thai massage.

Like the other night, where we had a family dinner at the Palms Thai restaurant. Little did I know that we were in one of L.A’s truly legendary Thai eating dens, with a phonebook-sized menu consisting of every Thai dish you have ever thought of. And also some that you never have, like wild boar with curry sauce, frog with green peppercorn, spicy chicken feet salad, raw Thai sausage, and aged hen soup. Although the real highlight was the nightly show, where an Asian Elvis impersonator crooned and serenaded us with Thai-accented versions of all The King’s greatest hits. If that isn’t reason enough to brave the rush-hour freeways, I don’t know what is. In Culver City, not too far from Venice Beach, is a small conglomeration of Indian restaurants, eateries and stores. “How cool, Little India” I said to myself while driving through the area one day. Or so I thought. Because as I later discovered, this is just a tiny outpost of L.A.’s real Little India, an area located about an hour’s drive south, in Artesia. Here the small conglomeration gives way to a whole suburb of gold shops, saris, sitars, vegetarian restaurants and tandoori ovens. You can’t help but feel like you have been whisked away on a magic carpet, and then dropped off in central Bombay.

Not to be outdone, there are two small Pakistani enclaves – one in Westwood and one in Lawndale – that vie for the title of “Little Lahore”. But it is the city’s Bangladeshi community that has most got their shit together. In 2010 the community successfully petitioned for an area around Alexandria Avenue to be officially designated as Little Bangladesh, making it the newest ethnic hood on the L.A. block. So if you ever find yourself in Los Angeles late at night and hankering for a bowl of Dhaka-style biryani rice, this is most definitely the place for you. Down the road on Westwood Boulevard and then into Beverly Hills you’ll find “Little Persia” (also known as Tehrangeles). This is the epicentre for L.A.’s sizeable Iranian community, mostly folks who came to the USA before the revolution, and so who are decidedly liberal in their orientation. This is the spot for spiced meats on the grill, humus done fifty different ways, middle-eastern groceries, pistachio ice-cream, ridiculously sugary pastries, buying fine carpets, and lounging about in cafes playing backgammon and smoking hookahs.

That is unless you are prepared to venture further south, to “Little Arabia” in Anaheim (also known as “Little Gaza”). This is home to a largely Syrian-Egyptian-Palestinian community, where it is pretty much same thing, different place. Only the humus here is done at least seventy different ways.

And then there is Little Armenia in Glendale, home to the largest Armenian population anywhere in the world outside of Yerevan. Here the shop signs are almost exclusively written in Armenian script, the humus flows in rivers, the backgammon boards are out, and super-strong coffee accompanied by hunks of baklava are the polite way to end every meal. Which is pretty much as close to my definition of heaven on earth as you can get. 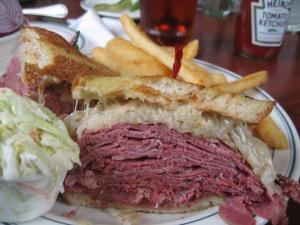 Finally, closest to my heart, there is the bagels and borscht belt on Fairfax Avenue between Melrose and Beverly. Los Angeles is home to one of the world’s largest Jewish communities, and in “Little Jewville” (that’s my description – it is not official!) there are countless synagogues, kosher supermarkets, Judaica stores, and delis dishing up all of my favorite Eastern European Jewish classics. Like massive pastrami sandwiches, bagels piled high with lox and schmeer, matzo ball soup, and knishes. The most famous of which is probably Milky Way, which in addition to being kosher and serving up some truly mean-ass cheese blintzes, happens to be owned and run by Stephen Spielberg’s mum (“Hollywood demigod or not, he’s such a nice Jewish boy….”).

Or for a slightly different twist, try any one of the many places popular with L.A.’s sizeable expat Israeli community, whether in “Little Jewville” (like Ta-Eem and HaBayit) or the Valley (like Itzik Hagadol and the Tel Aviv Grill). Here is it wall to wall falafel, shawarma, humus, fresh baked pita, and shakshouka. For me at least, this is the ultimate comfort food, and I could eat in these places day in, day out, forever.

Oh, and by the way, if you happen to be a religious Mexican Jew lost in L.A., don’t worry, this amazing city has even got you covered. A friend took me to Mexikosher, where Chef Katsuji Tanabe (possibly the least Mexican or Jewish name of all times) cooks up seriously good, kosher, organic, authentically Mexican food. Honestly, if anywhere sums up the weird and wonderful diversity of Los Angeles better, I’m yet to find it.

In the rest of the world most cities of any size tend to have a Chinatown area, and maybe a Little Italy area. But Los Angeles is a city that has taken the concept of “Little Somewheres” to a whole new, global level. And as a result I am discovering that L.A. offers a lifetime’s worth of ethnic eating adventures. All of them conveniently located right on the front doorstep.

I really think I am going to like it here.